I AM rAMPED. About ramps of course. Because what is more exciting than perennial wild onions?!?!?! Ramps are making their way onto more and more plates, and have a fleeting season since most of them are foraged. I started looking for them around Worcester at the beginning of May, but they were no where to be found at any grocery stores or farm stands in the area. Luckily I have some Vermont connections who were not only willing to buy me ramps, but transport them all the way down here (don’t worry, the trip was already planned, the ramps just jumped on for the ride). I was inspired by this Ramp Carbonara, but adapted it to reflect my fridge contents. The ramps were all I hoped for, the bulbs had a nice garlicky sweetness, but they softened far faster than leeks. The tops tasted a lot like garlic scapes, but had a texture more like spinach than scallions. Hopefully by this time next year I’ll have found a local spot to forage my own. 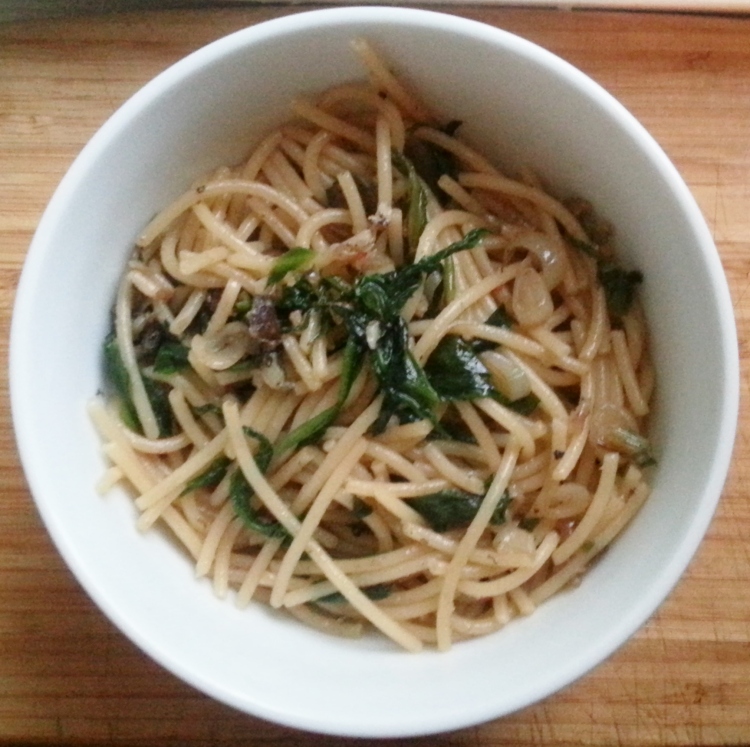 If the sausage is in casings remove them and add to the frying pan. Break up the larger chunks and cook through, about 7 minutes. Remove the sausage from the pan with a slotted spoon, leaving the fat. Add in the mushrooms and cook for 5 minutes until they are browned, then remove from the pan and put with the sausage.

Salt the pasta water and add the spaghetti to cook.

The mushrooms likely absorbed the fat left in the pan, so heat the olive oil over medium heat. Add in just the ramp bulbs and saute for 7-8 minutes, until they are soft and start to take on a bit of color. Add the ramp tops to the pan and saute a few minutes more until they are wilted.

Further reading (updated 6/5/14): Why There’s A Black Market For Ramps In Quebec

One thought on “RAMP IT UP”