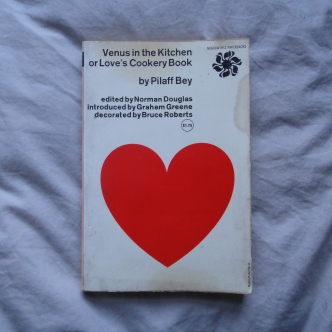 I love used book stores. New ones have their draw, but shiny books come at a premium. Though you never know what you will find at a used store, discovering long-sought after books or unknown gems is a high worth seeking. This summer while down the Cape found myself in Hyannis, which is a not my top vacation destination. It’s mostly populated with t-shirt shops and seafood restaurants that cater to the masses. But, it is also home to Tim’s Used Books, a huge store overlooked by everyone else looking for boogie boards and battered fish. I always peruse the cookbook section in such places and could not help but take Venus in the Kitchen or Love’s Cookery Book by Pilaff Bey off the shelf. I opened to the introduction and read the first sentence: “In those last years you would always find him between six and dinner-time in the Café Vittoria, unfashionably tucked away behind the Piazza.” That sounds like a place I want to hang out, and as my full name is uncommon, I’m usually partial to any reference to it (it’s also the reason I picked up Angels and Demons at an airport a decade ago). After flipping through a few recipes it went in the “buy” pile immediately, and Love’s Cookery Book stands as my best used bookstore find yet. It’s a compilation of aphrodisiac recipes written with no ingredient lists. Just short (and a few long) paragraphs describing recipes “collected slowly, one by one, for the private use and benefit of a small group of friends, most of whom, I am sorry to say, are older than they want to be….”

It took longer than it should have for me to become curious about the man behind the recipes. Pilaff Bey is a pseudonym for Norman Douglas, but Douglas is listed as the book’s editor so he just barely separated his real identify from it. Douglas was a serious fiction and travel author, and Love’s Cookery Book was the twenty seventh of his twenty eight books published just before his death in 1952. His death was rumored to have been caused by a purposeful drug overdose to escape an illness, and his last words are supposedly: “Get those fucking nuns away from me.” It seems that Love’s Cookery Book was Douglas’ effort to pass along his lifetime of erotic cooking wisdom before it was claimed by his death.

Bey’s recipes are inconsistent to say the least, with some having absurdly specific instructions, and others so vague they can barely be called recipes.  The range of ingredients is pretty narrow. Besides a chapter on mushrooms, vegetables are barely present except as aromatics and a seven page Vegetables and Salads chapter featuring mostly artichokes, celery, and peppers. There is a lot of seafood (especially eels, mussels, oysters and snails), game meat, offal, cinnamon and other warm spices, and copious quantities of wine and brandy.  This recipe Róto Sans Pareil is a turducken almost six times over, with seventeen different game birds stuffed into one another.

Some recipes are a single sentence, such as Goose Kidneys: “Martial asserts that taking the kidneys of the goose pounded with pine seeds, sugar, pepper, cinnamon, and fresh yolks of eggs, made into croquettes, cooked lightly in the oven, is admirable for warming cold spirits.” Many of the recipes end with delightful short musings on the dish just presented, such as “Could not be better.” (Yellow Sausages), “Another reliable stimulant.” (Veal Sweetbreads á la D’Ayen), “Not everybody cares to treat oysters in this fashion.” (Oysters in Champagne), “Not very invigorating.” (Scalloped Crab), “A noble aphrodiasiac.” (Frogs’ Legs), “A stimulant for sturdy stomachs.” (Pork Chops with Fennel), “Rather banal, I venture to think.” (Purée of Celery), “Much ado about nothing.” (Turkey in the Italian Way), and the especially puzzling “Monselet declares that is the chaste Joseph had been given this dish by Potiphar’s wife she would not have been snubbed on that memorable occasion.” (Langouste a L’Américaine). 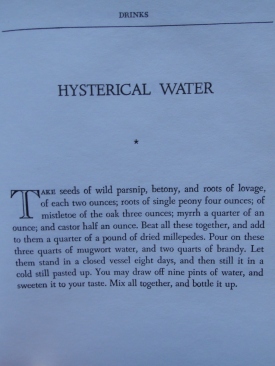 The drinks chapter is even odder than the rest. Some of them take a week or more to produce (or fifty days), which is not the kind of patience I have when craving a cocktail, and require staggering amounts of alcohol (anyone know where I can buy gin by the gallon?). The recipe for Hydromel is as follows: “When the dog days set in, take some spring water; to three parts of water add one part of clarified honey; put this mixture in earthenware vessels and have it stirred by your slaves for a long time. Leave it out in the open, covered with a cloth, for forty days and forty nights.” As this book was written in Europe  in the 20th century, I can’t imagine where Bey would expect having slaves to be common practice. 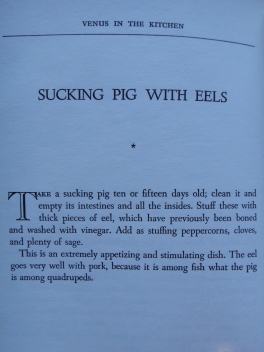 I thought about trying out a few of these recipes for my own Valentine’s day dinner, but decided to go with some more traditional fare (less eel). There will be cornish game hens though, which are the closest thing to game I can get right now, so I think Bey would approve. I will be keeping Bey’s mindset though and not taking my cooking too seriously. This cult classic cookbook will always serve as romantic inspiration and is without a doubt the most amusing entry on my cookbook shelf.