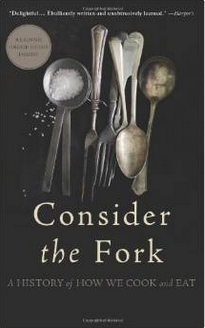 In Consider the Fork: A History of How We Cook and Eat, Bee Wilson takes us through the development of ubiquitous cooking tools, some of which have changed very little since their invention (like the spoon) and others that have improved many times over (like refrigeration). Wilson is mostly concerned with history and adoption, but does cover some science when appropriate, like in the development of canned foods. Maybe Consider the Fork was deemed a catchier title, but I think a spoon would have been more appropriate as it is the almost universal utensil. Wilson notes that the fork is not loved by all (chopsticks and fingers are the other main utensils), but just about everyone uses a spoon. Cooking and eating are the grand unifying activities across all cultures, which are also united by a simple but ingenious tool.

It was the fork though, that changed our bodies. Many of us deal with a lot of metal in our mouths during adolescence to achieve the ideal straightness and overbite. The aptly named Professor Charles Loring Brace is an American anthropologist whose researches the development of the overbite, which didn’t appear until the late eighteenth century. As there was no big change that happened to diets at that time, his theory is that it was caused by the widespread use of forks. We no longer needed our top and bottom teeth to touch for optimal biting and ripping, so the top layer progressed forward. Evidence has so far supported this theory, as cultures that adopted the fork later (or not at all, such as the Chinese) have corresponding overbites (or not).

Consider the Fork covers more than just utensils though. Continuously puzzling, is American’s reluctance to join the rest of the world (except for Liberia and Myanmar) in adopting the French metric system for measurement. Instead we insist on measuring dry goods by volume, even though this is highly variable. Wilson says that our measurement tools should fulfill these five requirements: accuracy (adhering to a fixed value), precision, consistency (measuring the same amount time and again), convertibility (fitting into a system and being able to measure butter as well as flour or any other ingredient), and ease of use. (113-4) Volumetric cups do none of these well, except for being as simple as possible and portable. But, “a cup of something is not just a cup. Experiments have shown that a cup of flour may vary in weight from 4 to 6 ounces, just by changing the degree to which the flour is sifted and airy or tamped down.” (116) I did an experiment with 5th graders where they each scooped a ½ cup of flour and then we measured them, and they varied by 15 grams. Besides the variability, the system just does not make sense. Even after a decade of independent cooking, I still find myself having to look up how many tablespoons go in a cup, whereas I never need to question how many milliliters are in a liter. I know large infrastructure changes as at first a setback, but I think we owe it to the sanity of future generations to embrace metrics. We can measure by the liter, run by the kilometer, record heat in Celsius, and measure in harmony with the rest of the world. (And while we’re at it, let’s get rid of daylight savings please.)

Wilson doesn’t devote many pages to the subject, but she brings up labor saving in an interesting way.  The general view of devices such as fridges and food processors is that they use less labor to get food from the field on to our plates. But really we’ve just been further removed from the labor: “We do not see the hands in the chicken factory that boned the breasts, never mind the chickens that gave their lives, nor the workers who labored to assemble the parts of our whizzy food processors. We only see a pile of ingredients and a machine ready to do our bidding. Alone in our kitchens, we feel entirely emancipated.” (173) She certainly paints a lonely picture of the kitchen, disjointed from the connected and transparent food system that is increasingly called for.

Consider the Fork was well researched, and a mix of anthropology, history, and science. The emphasis was more on the anthropology and history than science which disappointed me a bit, but it didn’t detract from my reading experience much. It was an entertaining read, and a great addition to the general culinary history library (if these kind of books are your jam, Catching Fire: How Cooking Made Us Human is another great one).

One thought on “Consider the Fork”