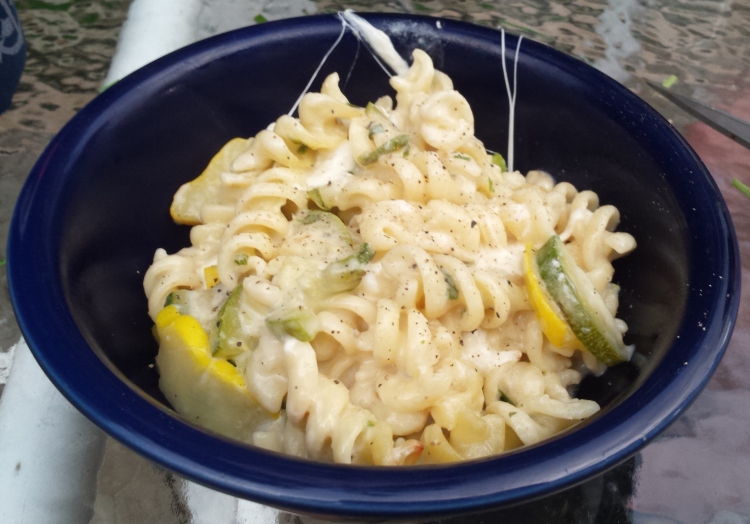 Greek chopped salad. This is the salad I wait all winter to eat. Garden tomatoes, cucumbers, and oregano, with a pepper, olives, feta, chickpeas, and a simple dressing. Recipe forthcoming.

Herbed summer squash pasta bake (pictured above). I was debating between this and pasta with fried zucchini salad which I made last summer. The baked pasta was good, but was a bit too heavy for me. I’m glad I tried it, but the fried zucchini one is the one I’ll come back to every summer (just beware frying the zucchini takes a while, but it is worth every minute).

Grilled cumin-lime zucchini quesadillas. I liked that these called for fresh mozzarella (because I happened to have some), but I think it is too wet a cheese for ideal quesadilla making. But still, I liked the fun flavor combination to make vegetable quesadillas a little more interesting.

Kohlrabi salad. Kohlrabi is one of those vegetables that is so hot right now, and I’ve seen it in many a farmer’s market and blog but somehow it hadn’t made it to my table. Once again embracing farm stand impulse purchases I bought some last week without a cooking plan and was guided by Ottolenghi. My main problem was with some of the kohlrabi, which seemed to have been grown too long because they were super fibrous. The bits that were good are what I assume all kohlrabi is supposed to be like, nice and crunchy with a mouthfeel similar to celeriac, but tasting just like cabbage.  I threw a little cucumber in too, and loved the creamy dressing and crunchy veg topped with slightly sour sumac (plus the color contrast was excellent).

Fish-fragrant eggplant and Sichuanese chopped celery with beef. I’ve been waiting to make this eggplant recipe since I read Shark’s Fin and Sichuan Pepper and I think I’ll probably make it once a week for the rest of eggplant season. It was incredible and brought out the absolute best qualities of eggplant – luscious texture and awesome flavor absorption. I even substituted water for the chicken stock as I was making this on the fly, and it was still everything I hoped for. And my undying love for eggplant shouldn’t overshadow the celery dish, which was crunchy, spicy, slightly sour and rounded out with just a little fat from the beef.

Bánh mì breakfast sandwiches. I made these while I was preparing for a special dinner party (more on that later). Simple ingredients, minimal effort, but such high return. The salty-fatty-spicy-sour-herbal flavor combo is just unbeatable.