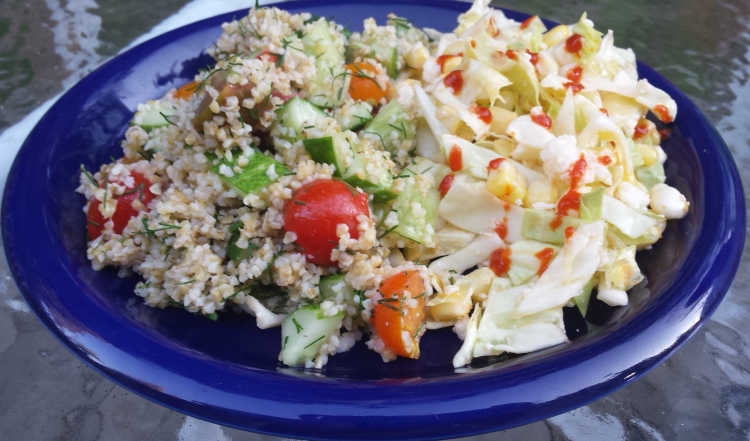 My cousin moved to Barcelona for a year this week, so last Sunday we had a Bon Voyage dinner. He requested my mom’s cilantro lime chicken fajitas, and I made salsas, bean dip, black beans, and Mexican corn to go alongside. The salsas were adapted from Mexico the Cookbook, the black bean dip from Thug Kitchen, and this Mexican corn. I did half ears of the corn since there were so many food options, and this is one of those super simple dishes that is so much more than the sum of its parts.

Summer squash and brown rice gratin. I really liked the concept of this dish, and the brown rice substitution Sara made, but it didn’t come out quite as it was supposed to. I didn’t pay close enough attention to my squash juice and milk mixture as it warmed and it curdled (so really, just barely warm it). Mine also came out a bit soupy, and I used a summer squash instead of a zucchini, so it did not turn out to be the most attractive dish. I still mention it but because despite of all these missteps, it still did taste pretty good, used a lot of squash, and is worth trying again.

Roasted Zataar Carrots (from Bowl + Spoon). An easy side. I don’t think I’ll always make the tahini sauce, but this was a nice fast side to go with the squash gratin (and use up some fridge bounty). I don’t think the orange juice or zest is necessary, the carrots are sweet enough on their own.

Summer rolls with carrots, cabbage, cucumbers and peanut sauce. I don’t use a recipe for these anymore, just soak the spring roll wrappers in very warm water for 5 seconds, let the water soak in, and then fill with whatever vegetables  or other fillings are around. The peanut sauce I adapted from these delicious bowls. It’s a favorite I always double to freeze, and will get around to posting the full recipe at some point.

Soba noodles with eggplant (from Thug Kitchen). This recipe was dead easy and tasty, but I was left wanting a little bit more. Maybe other vegetables besides just eggplant, or a little something else in the sauce (tahini? miso?). Definitely not a full meal for four, more of a side dish (but I served with summer rolls).

Sriracha and lime corn slaw (pictured above on the right). I’ll admit I didn’t fully read this recipe, but I wanted to go with the flavor profile plus a few additions from my fridge to clean out all the produce before I went away for the weekend. I roasted the corn in the husk in the oven for about 20 minutes at 425F, removed the husk, and cut off the kernels. I chopped the quarter cabbage I had in the fridge, added that to the corn kernels, added the crumbled cotija and topped with a sriracha, lime, and olive oil dressing.

Tabbouleh with mint (pictured above on the left). This was part of my pre trip clean out the fridge salad pairing. I had half a bunch of mint hanging out in the fridge, so I used that instead of the parlsey, mint, and scallions. My bulger was definitely plenty cooked in under an hour. An excellent and easy salad to pull together with garden ingredients and a little more heft from the bulger.