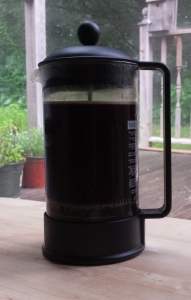 Entering into a relationship inevitably leads to the melding of habits. Will and my morning routine’s both started with coffee, but the methods differed. I used my roommate’s coffee maker and made a strong brew every morning. Will made a weaker brew in his French press, with water boiled in a kettle right in his bedroom. Our processes slowly merged as we picked the best practices of each other’s methods. We switched to using a French press exclusively, but brewing with twice the amount of grounds.

Then we added a burr grinder to the process, which does add a few minutes in the morning but makes a huge difference (and is also the main reason we switch off coffee making duties daily). Someday we’ll spring for an automatic one, but this one works well and is very portable (best camping coffee ever).

Earlier this summer we visited Rochester, NY, and one of our must stops was Joe Bean, which Will claimed to be the best coffee shop he’s ever been to, but I think he undersold it a bit. The atmosphere is a cross between a food lab and a bar that you want to hang out in every day, starting in the morning for coffee and through the night for beer or wine. It is not a place you go for a fast cup. You talk to the baristas about what you like, what their current roasts are, and the brewing method that will best bring out your favorite flavors. On our first visit we had a Chemex, which made for an amazingly floral cup (a flavor I didn’t even know coffee could have). On our second visit we went a little wilder, and ordered a siphon, which was so fun to watch them make and equally complex. These were obviously THE people to ask about coffee, and since we couldn’t come back for a third visit I inquired about their French press brewing method. While the man I talked to said it was not his favorite brew method, he said he fills the press to the top, lets the coffee sit for a minute, gives it a big stir, and then puts the top on to finish brewing.

Before this we had been just barely wetting the grounds, letting them sit for a few seconds, and then pouring the rest of the water and letting it brew for four minutes. This little change made for an even bolder cup with the same amount of grounds, and finally solidified my status as the superior coffee maker in the couple (for now at least). It may seem like a minor difference, but the taste difference is surprisingly noticeable. Below is our full brewing method right now. The real aficionados weigh their grounds and water, and measure water temperature, but we’re not at that level yet.  This produces a consistent enough cup for our liking.

French Press for Two (or one very caffeinated person)

Set 1 liter of water to boil. Measure out 6 tablespoons of coffee beans into the burr grinder and grind away on coarse. Put the grounds in the French press. After the water boils, let it cool for a minute so it is no longer bubbling. Fill the French press until an inch from the top, and set a timer for 1 minute. At the one minute mark vigorously stir the grounds and water. Place the top on the press and set a timer for 3 minutes. After 3 minutes press the coffee, and serve how you please (in our house: just a splash of milk, no sugar).