Miso sweet potato and broccoli bowl. This is another recipe I rarely deviate from. The tangy miso sauce expertly balances the sweet potato. If I don’t have fancy rice I just use brown and little is lost. A redemptive weeknight meal that fills and pleases.

Baked falafel with beet dip and pita bread. Admittedly this was a bit ambitious for a weeknight, but buying pita would make for a much simpler meal. I liked the falafel, but I’m not enough to settle on them as my go to recipe. My favorite falafel ever from Sofra is served with beet tzitziki, so that inspired pairing them with this beet dip (next time I’d do more yogurt and less beets to make it even more like Sofra’s version). This was my first time making pita and it was SO FUN. Watching them puff up into little pockets was incredibly satisfying. As you cook the pockets individually they do take a bit longer, but the process itself was very easy. My one misstep was for a few of the pita I rolled them out too thin and then balled them up and re-rolled them, and those did not puff into pockets like the others.

Mexican tortilla casserole. This recipe gets high marks for return on minimal effort, and it feeds a crowd. I subbed kale for the spinach because it was already on hand and added in the last of the leftover chicken fra diavolo (shredded). Flour tortillas instead of corn were my only other change. This is a great basic recipe to substitute whatever veg and beans you have around. 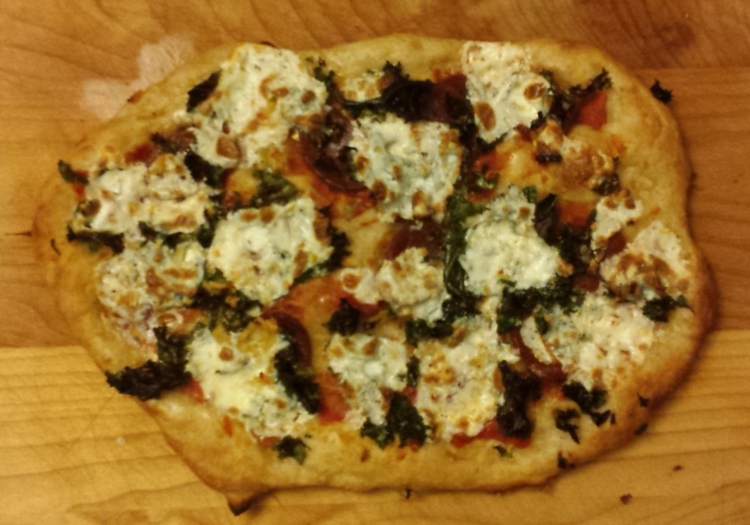 Pizza with sauteed kale, pepperoni, and garlic oil. I’ve been using the dough recipe from Lady and Pups for all my pizza making recently and is the best dough I’ve made. I don’t always have bread flour and regular still makes an awesome dough (maybe even with a little wheat flour snuck in as well). Drained chopped tomatoes, thinly sliced stick pepperoni, lightly sauteed kale, mozzarella cheese, and finished with garlic oil (just like in the Lady and Pups recipe above, but without the capers) make for a richly flavored pizza. I love a bit of kale (which gets nice and crisp) to balance out the pepperoni (but that probably surprises no one).

Roasted cauliflower and garlic dip. I made this to take to a brewery (many let you bring food in if they don’t serve any) along with the rest of the beet dip, carrots, and chickpea crackers. I left out the pepitas and nutmeg and forgot the parsley and it was a big hit.

Chickpea crackers.  These were the easiest crackers I’ve ever made (and they’re gluten free if that’s your thing). There is no rolling, just spreading the batter on a baking mat. They were heavily spiced, so next time I think I’ll hold back on the cayenne and cumin.

Since I ran out of bread to make scrambled eggs with kale and whipped feta on toast I had to revert to the old standby, hash browns, kale and a fried egg. Breakfast was saved.

Not something I cooked – I’ve enjoyed my share of small plates with pretentious names and ingredients. But sometimes it can go too far, and this hipster bar menu generator does everything right. I love the balance of ridiculously namesd dishes and single items (oyster – $14).