Shakshuka. I scaled this way down to just serve two. I used maybe ½ a cup of onion, a stalk of celery, a 15.5 oz can of chopped tomatoes, and a couple garlic cloves. No pita was to be found, so I served it with toasted bread and it was all ok. It is hard to go wrong with a paprika spiked tomato sauce, eggs, and feta. 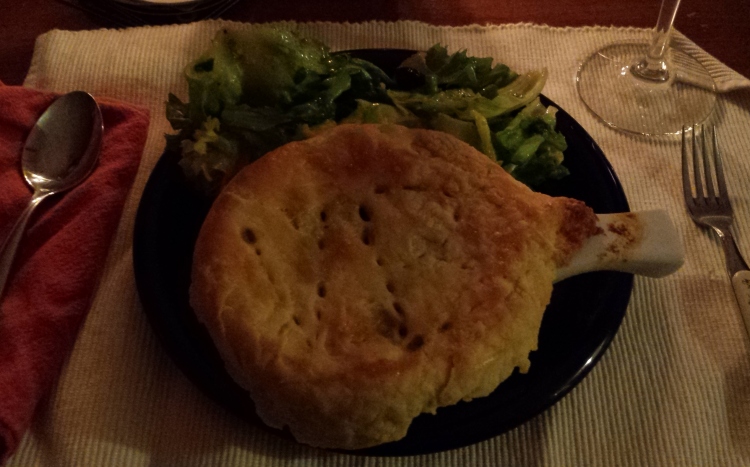 Pancetta and white bean pot pies. I believe this was the first recipe I made from The Smitten Kitchen Cookbook when it came out. This time around I didn’t start with the pancetta because there was a vegetarian in the bunch. Maybe because the pancetta fat wasn’t the base of the sauce, but its flavor was barely detectable in the finished dish so next time I wouldn’t bother. I used kale in place of the chard because I already had a bunch and it worked just as well. There is so much butter in the crust. So much. I even scaled back a tablespoon and replaced it with olive oil. I may go even more next time. So these pies are a bit indulgent, but since there is barely any meat they are still lighter than your usual pot pies. They are nice and creamy, but full of vegetables. They were extra fun dinner party fare.

Escarole salad. Ok I didn’t cook this, but my mom made it to go alongside the pot pies and it was excellent. The dressing was bright with the complex saltiness of the anchovies and none of the fishiness. I especially liked such an acidic dressing to balance the creamy, buttery pot pies.

Cauliflower báhn mì. This is the first recipe I’ve made from Thug Kitchen: Party Grub (it’s also the cover photo). I didn’t drain the cauliflower sufficiently (or at all….) so my bread crumbs got a bit soggy. They may be better just sprinkled on top of the cauliflower. I thought it was a bit weird to call for just two shiitake mushrooms. Maybe the mushrooms in LA are bigger, but mine got totally lost in the cauliflower (also, this is why ingredients should be defined by weight!!). Next time I would add more or leave them out entirely. This makes a great sandwich though, all the right báhn mì flavor and texture combinations. I’ve heard so many times that you should taste your jalapeño before adding it to a recipe, and this is something I rarely take to heart. Thankfully the jalapeños in this recipe were easily removed, because I ate half a slice and my mouth was ON FIRE (and I enjoy some nice heat). Lesson learned.

Smoky tortilla soup (from Bowl + Spoon). I love how fast this was, and the ancho chilies did add a nice smokiness. I used the pinto beans instead of chicken and a 28 oz can of whole tomatoes that I pureed instead of the fresh (see: November), and topped with sour cream, cilantro, tortilla chips, and avocado. My one complaint was the cornmeal was hard to integrate in the soup just by stirring and ended up clumping. Next time I would add before pureeing the soup. I’ve also made the tortilla soup in the first Thug Kitchen book which is excellent, and calls for less exotic ingredients so that will likely remain my staple.

Salad with escarole, roasted cauliflower, and celery. This salad was unplanned, but just an attempt to use up items in the fridge before heading away for the week and of course ended up being the best thing I made. There was maybe a cup of escarole left over, so that went into a bowl with one thinly sliced stalk of celery and ½ a cup of chopped Kalamata olives. Half a cauliflower (leftover from the báhn mì) was chopped into bite sized pieces and tossed in olive oil, zest from one lemon, and salt. Roasted for 20 minutes at 425F it took on a nice char. While that cooked I made a dressing with the juice from half a lemon, a few glugs of extra virgin olive oil, a teaspoon of Dijon mustard, salt, and pepper. Once the cauliflower cooled a bit it went into the bowl with the rest of the ingredients, and everything was tossed in the dressing. I want this again right now. 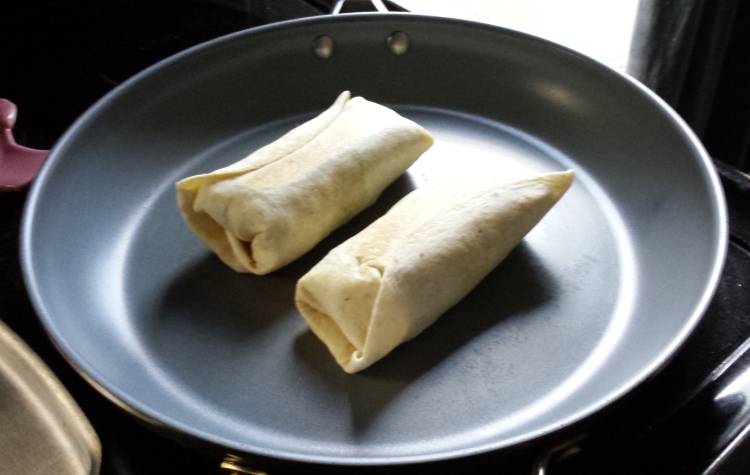 Breakfast for a couple days was the eternal favorite, country toast with mashed avocado topped with a fried egg and hot sauce. Other days it was the other eternal favorite, scrambled eggs, pinto beans (I made extra when I cooked some for the tortilla soup), and mashed avocado in a flour tortilla. The key is to toast the burritos in a dry pan once they are filled to uniformly heat the ingredients (and melt and cheese if you added it), and crisp the tortillas.