I feel like I’ve barely cooked or eaten this week, though these photos and the fact that I’m still able to type prove otherwise. My time and mind was dominated by the agriculture, nutrition, and cooking winter break camp with 4th-7th graders I ran. We planted, learned, crafted, and cooked all week.

My favorite activity was perhaps having each kid plan out a week’s worth of meals and the shopping list to go along with it. I brought in a whole bunch of cookbooks for them to go through and I think greatly excited a bunch of parents who realized this was a task their kid could take over. We cooked every day, and I’ve done this enough to have the basics down. Go over knife safety every time, but let them do the work themselves. Make sure everyone has a task at all times. Give them room to experiment.

We made pizzas on tortillas and English muffins, hummus and black bean dip, fruit salad, snacks with nut butter, and smoothies (I used Alton’s hummus recipe, and one of the campers came back to ask for the recipe so her dad could make it for his next party). The smoothies were probably the biggest hit. After making a basic recipe they added spinach or kale leaves one at a time, but then they just kept experimenting with the rest of the ingredients until we ran out. Even the kids who asked me if they absolutely had to add the greens were slurping them up. Heck yes.

Winter salad with mind-blowing sauce. I wouldn’t necessarily go with “mind-blowing,” but it was a quick, interesting sauce that made a giant platter of vegetables very enticing.

Steak, Guinness and cheese pie. This isn’t exactly quick or easy….but so delicious. Each time I make it I’m amazed that such a complex sauce emerges when the only liquid is Guinness. Not something to make often, but most certainly worth making. Make sure you have a crowd to feed, because though the recipe says it feeds 4-6 it is more like 10-12. Let it cool for a bit if you can wait before serving so the filling doesn’t spill out of the crust as much.

After a half-day drive and a long shopping trip, a fast dinner was in order: quesadillas with pinto beans, scallions, sauteed kale, cherry tomatoes, and chopped scallions.

Somehow I made one too many pans of stuffing at Thanksgiving, so this has been waiting for it’s day in the freezer. To go alongside I roasted a chicken following the basic instructions in The Homemade Kitchen and I made a salsa verde with shallots and parsley (from An Everlasting Meal). The shallots in the salsa verde were soaked an vinegar and drained, so I used the vinegar on a big mountain of sauteed kale. Classic combinations for a reason.

Polenta with chicken ragu, sauteed mushrooms, roasted cherry tomatoes and peppers, and salsa verde. I read through This is Camino which inspired the ragu which was basically a well-cooked mirepoix with cooked chicken and broth (from that roasted chicken earlier in the week). Another reminder of how polenta is an excellent base to make a meal out of whatever else is kicking around in your fridge. 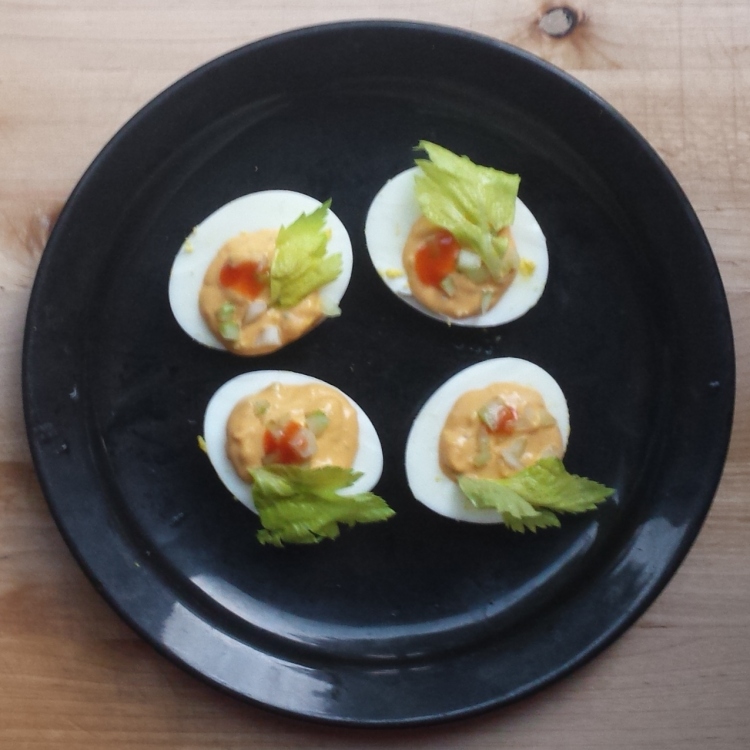 Buffalo blue cheese deviled eggs. I can’t believe I used to not like deviled eggs. Probably because they were lacking blue cheese and hot sauce. These came together in about as long as it took me to cook the eggs, and they will be coming back again.

Steak with mustard butter and frites (from My Paris Kitchen) with creamed spinach. I started with a really nice steak so I didn’t do much work there, but these frites make something incredible from a most humble potato. My next poutine attempt will start with these fries.

Quinoa with buffalo tofu, broccoli, sweet potatoes, and ranch. This barbeque tempeh recipe was my inspiration, but as I was about to make this I realized I didn’t have any barbecue sauce or the energy to make some. So this became buffalo tofu, marinated quickly an a 1:1 of Frank’s and olive oil, then roasted. The sweet potatoes were roasted, and the broccoli was steamed (because I was out of oven space). I made a non-vegan ranch with buttermilk, a little mayo, garlic, lemon juice, and dill. It’s safe to say this will all happen again.

Since I had to be at work much earlier for camp I ate most breakfasts at my desk this week. Before I left I thawed some frozen berries and mango in a jar and topped them with a big scoop of Greek yogurt,  maple syrup, and my mom’s granola. I also made a batch of whole wheat chocolate coffee banana muffins because they are the best.