Steamed and roasted chicken wings with garden salad. After a weekend of BBQs, we spent the actual 4th entirely at home (and it was glorious). I had contemplated a grocery store trip, but laziness prevailed and instead I made dinner with ingredients found in the freezer and garden (which is what I should be doing now anyways). I started by steaming the chicken wings (a la Alton), and then roasted them in cast iron with rosemary added halfway through (inspired by incredible wood-fired chicken wings I had at Jack’s Abby). They were made into a real meal with a salad of cabbage, collards, and kale with a lemon vinaigrette.

Pizza with garlic scapes, squash blossoms, and basil. I used my usual crust, brushed the base with olive oil, then put the veg (I roasted the chopped scapes for about 5 minutes in the oven to parcook them, and sliced the blossoms). On went shredded mozzarella, then into the oven at 500F for about 10 minutes, and after sprinkled with chopped basil and crushed red pepper flakes. 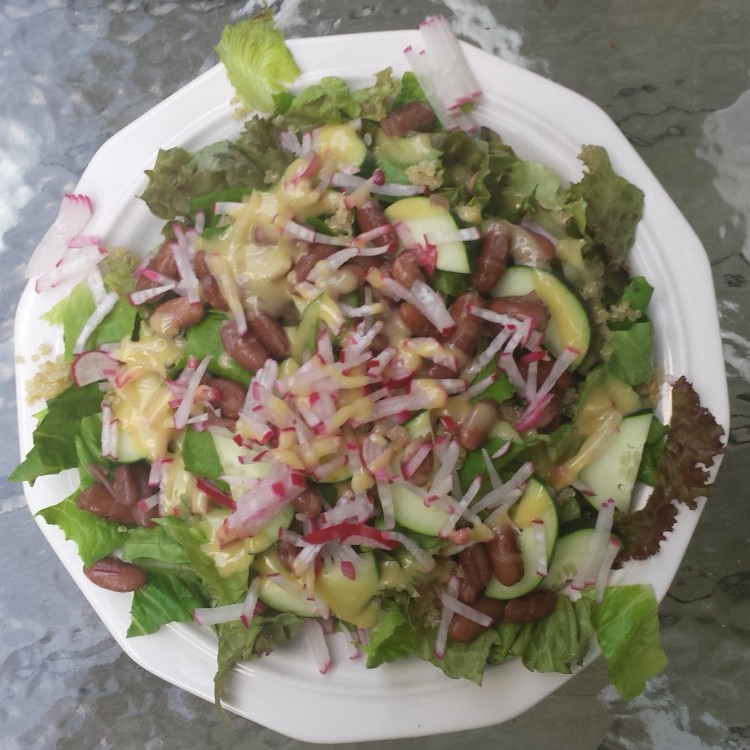 Big salads with radishes, cucumbers, quinoa, beans, and lemon tahini dressing. On an incredibly hot summer day head to your local farmer’s market. Grab some lettuce, and a selection of whatever else looks good (radishes are still great, cukes are starting to come in). Once at home, read in the shade for a while because it is still too hot to do anything. Then when you can muster it, throw half a cup of some kind of grain on the stove, prep your veg, add some legumes if you have any, and make a dressing with the dregs in the tahini jar. Summer dinner: done. 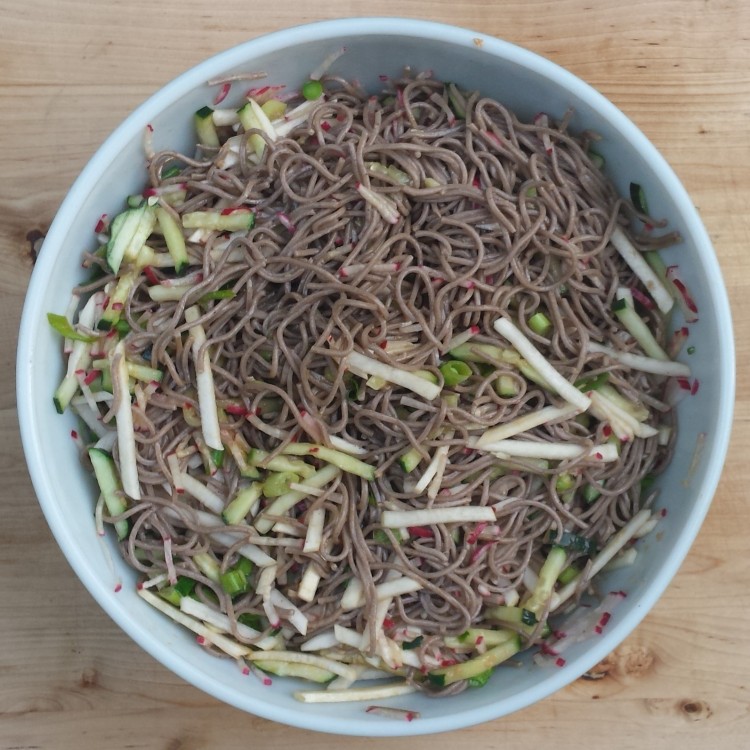 Cold noodles with miso, lime, and ginger. This is an ideal hot weather dinner. I didn’t like the miso dressing as much as the peanut sauce I used on cold noodles a few weeks ago, but it was certainly quick. I used radishes, cucumbers, a handful of snap peas and some small turnips.

Shakshuka. I followed a tip from Ottolenghi this time around and started by dry toasting some cumin seeds in the pan before adding oil, sauteing onions, etc. It made for pervasive, toasty cumin flavor (which I’m a big fan of).

Coconut lime popsicles. These are life changing. Before this week, I hadn’t hit on an everyday popsicle recipe. I mean, I’ve made some really good ones, but they were too indulgent for regular cooling. But these. Oh man. Three (3!!!) ingredients, about that many minutes to pull together, great texture once frozen, delightful flavor. Easy enough to pull together before dinner when you know scorchers are in the forecast.

Summer berry crisp. Sometimes I think about making pies…and then I think, why would I do that when I can make a crisp? Much better fruit to grain ratio, and so much faster. I loved the addition of port, which made for a dark and jammy fruit layer. I used blueberries, black raspberries, and red raspberries.

One thought on “Last Week I Cooked….”