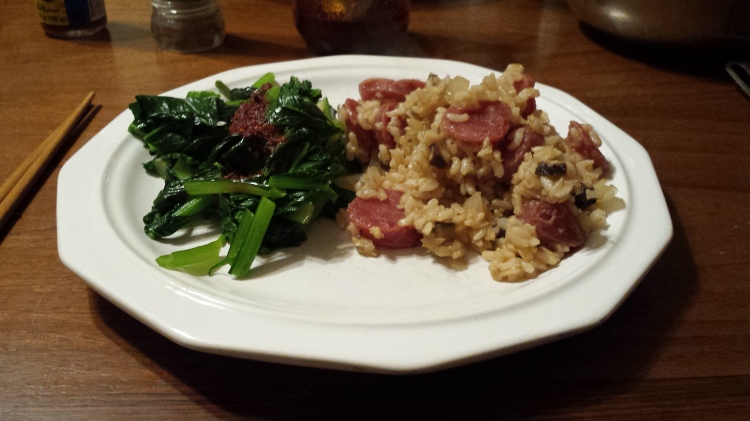 Sticky rice with Chinese sausage. There is a Vietnamese grocery store with other Asian ingredients not too far from my house. When I was shopping for something completely different I came across some of this sausage, and decided to buy it and later figure out something to do with it. I then ended up buying sticky rice to make this recipe….but didn’t read how to cook it until it was time to do so. An overnight soak followed by a steam?! Nevermind. I made what is probably an unacceptable substitute (brown rice), but it got dinner on the table that day. Never having eaten this kind of sausage before or had this dish, I wasn’t quite sure how to judge it. The sausage was definitely sweet for my tastes. I made some stir-fried greens with chili oil on the side, but I ended up stirring everything together for the leftovers and found the spice and slightly bitter greens nicely balanced out the sweet sausage.

Mama Chang’s Hot and Sour Soup. I made this a couple weeks ago, when it was soup weather. This recipe comes together so quickly but is exploding with flavor. I accidentally bought silken tofu, which the recipe specifically says not to use. Instead of adding in the tofu and then whisking in the scrambled egg, I added the egg and then stirred in the tofu and everything turned out fine.

Ultimate spaghetti and meatbrawls with serious Sunday gravy (from In My Kitchen). This isn’t how I grew up eating meatballs. The sauce is prepared more like a bolognese, but leaving out the meat (because it is in the meatballs) which makes for a more broth-y sauce. The recipe called for an hour of reduction, but I probably would have given it at least two if I was willing to push dinner off that late. After reducing it further after dinner, then eating it again as leftovers I was sold on the broth/sauce. It turned into a complex sauce full of umami from the tomato and parmesan. Definitely worth making, but just give yourself some time. This would also be especially amazing with fresh pasta if you have the time. 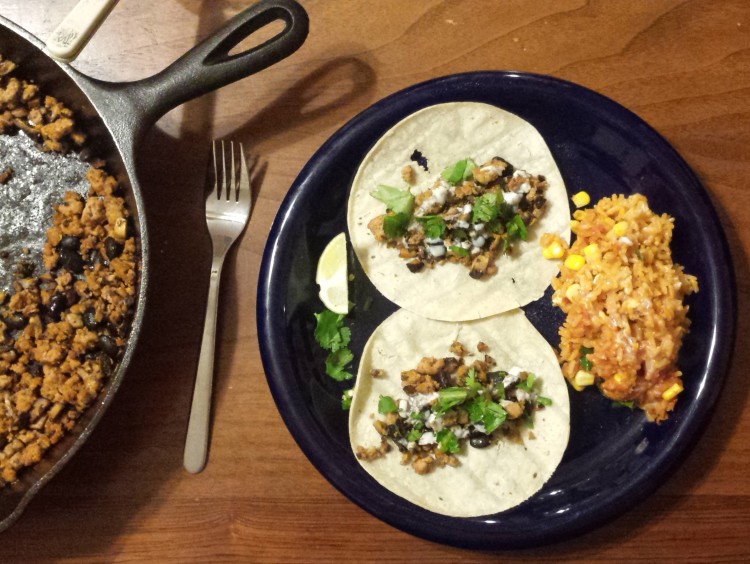 Ground pork and mushroom tacos with baked Spanish rice (from The Thug Kitchen Cookbook). I had some leftover mushrooms from the previous week’s hot and sour soup, plus ground pork leftover from the meatballs. I sauteed the pork to render the fat and break it up, and removed it from the pan when it was browned through. Then I cooked the minced mushrooms in a couple batches. When they were browned I added in some chopped chipotle en adobo, a few minced garlic cloves, cumin, salt, and the pork back to the pan. It made for a spicy and meaty taco filling rounded out nicely with some lime crema and cilantro. The rice was from Thug Kitchen, and was an easy baked dish. I’ve made similar versions before, but this one was especially good because it was made with brown rice and had just the right amount of liquid to cook the rice but not end up soggy.

Smokey black-eyed peas with roasted sweet potatoes and collards (from The Thug Kitchen Cookbook). I need to learn that recipes which call for a whole sweet potato per person are just crazy. I made six servings of this and 4 potatoes would have been plenty. The real star here are the beans, which are cooked with chipotle en adobo, allspice, nutmeg, paprika, and garlic. It makes for an awesome stew to balance out the sweet potatoes.

Green chile baked flautas (from The Thug Kitchen Cookbook). These check off all the right boxes for a tiring work week: fast, easy, healthy. You make a mashed bean filling with sauteed onion, a few spices, and corn (though I subbed sauteed kale), put it in a tortilla, roll it up, and bake it. After having made these a couple times now I think the filling would be better in a different format, because the tortillas don’t get super crisp or add much to the dish like this.

New old-fashioned coffee cake (from Flour). I make this coffee cake about once every five years. It is dense, buttery, and just delightful.

Maple oat scones (from Flour). I’ve made these before and loved them, but this time they turned out a bit dry. Did I not incorporate the butter enough at the beginning? Bake them for too long? Make them too small? They have great flavor and are not overly sweet so I will definitely try them out again.

Lemon cremes with oat-thyme crumble (from The Sprouted Kitchen). I had some leftover silken tofu from the hot and sour soup and had always wanted to try this recipe. The creme comes together about as fast as it takes you to put everything in the food processor and whiz it. The crumble was a simple combo of oats, nuts, coconut oil, and sugar, that I would make again and again just as a granola. For a dessert that came together in about 3 minutes and then just needed to be served, it was quite pleasing.

Hot and numbing wings and lo mein. I didn’t even watch the superbowl…but I will use any excuse to make chicken wings. These were crisp on the outside, and moist on the inside. I honestly would have liked them a bit spicier, but maybe my chili flakes are past their prime. The extra fridge space these need for a day is definitely worth not having to bring out the vat of frying oil. I’ve made this lo mein many times, and this go I used broccoli instead of cabbage. I find them slightly under-seasoned as the recipe is written, so I usually add a bit more soy sauce.

Cheesy polenta with sauteed onions, kale, and beans. This was what I meant to make last week when I forgot to buy cornmeal. I used a mix of cheddar and mozzerella in the polenta because there were bits of both languishing in the fridge. I used some schmaltz to saute the onions (saved from the chicken wings), then added in the kale to wilt. When the kale was cooked I added a can of kidney beans, salt, pepper, and red pepper flakes. 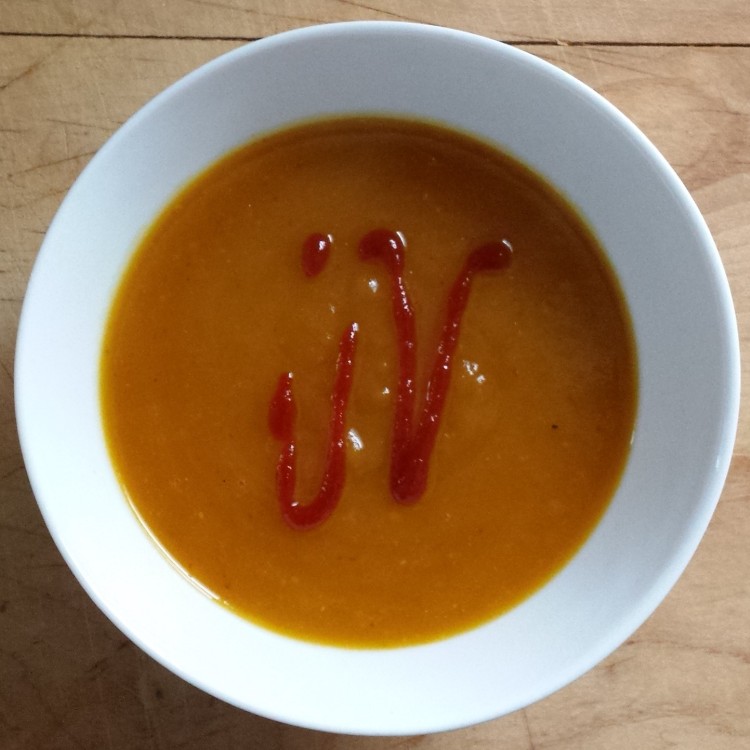 Winter squash soup with curry and coconut milk.  This is the only butternut squash soup I love. The coconut milk negates the grainy texture that butternut soup can sometimes have, and the addition of the sour fish sauce and spicy sriracha balances the sweetness.

Just a reminder that wheat toast with peanut butter, honey, and sea salt is a simple delight (especially on a snow day).

Dan dan noodles and fish fragrant eggplant (both from Every Grain of Rice). These dan dan noodles are epic. Spicy, numbing, salty, with a nice richness from the sesame paste. Fish fragrant eggplant is the greatest use of eggplant’s absorbency and meaty texture. I forgot how long it takes to fry the eggplant before you stir fry it though. Definitely give yourself 30 minutes for that step. 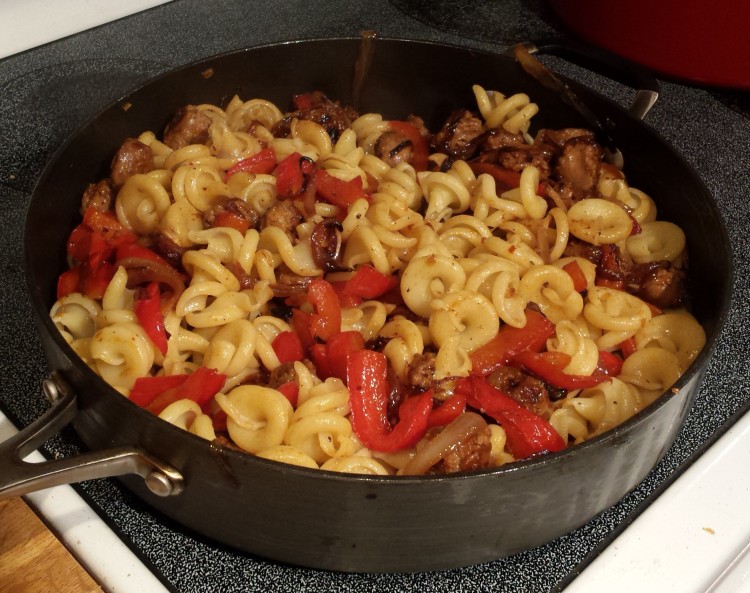 Pasta with spicy Italian sausage, peppers, and onions. This is a childhood favorite adapted from a pasta cookbook my mom had that had a recipe for every day of the year (maybe this one?). It was made with wagon wheel shaped pasta, so we always refer to it as “wagon wheels,” even when you make it with another shape pasta (as I did here, because wagon wheels proved hard to find). You saute about a pound of sausage then remove it from the pan. Add some olive oil to the fat and 2 Frenched onions (yes, it looks like a lot of onion). Saute until browned, and then remove from the pan. Add 2 sliced red bell peppers and saute until limp. Add a whole bunch of minced garlic (at least 3-4 cloves), a lot of salt and pepper, and 1 teaspoon red pepper flakes (more if you like). Saute for a minute or two until the garlic is fragrant and then add the onions and sausage back to the pan. Drain your pasta and add it to the pan, along with some extra olive oil if it seems dry.

Winter vegetable chowder with crispy cabbage. There are so many things about this soup I love. It is simultaneously filling, but not heavy, and bright from the lemon and mustard. It has roasted cabbage on top which makes for a surprising topping. Blending part of the soup makes for a thick base without adding anything additional. If you were looking for the winter soup to break you out of a rut, this is it.

Sauteed kale with bacon, white beans, and mushrooms over farro. This started out as a dish over polenta, but poor shopping made me reconfigure. I sauteed the 3 chopped slices of bacon, took it out of the pan once crisp, then sauteed the mushrooms. I added them to the bowl with the bacon, then sauteed the kale. When the kale was wilted, I added the bacon and mushrooms back in along with a couple cans of drained and rinsed cannellini beans. That went on top of farro, and was finished with a grating of parmesan cheese. It was quick and satisfying.

Citrus Brussels sprouts slaw with rice paper bacon bits and almond parm.  I didn’t go into this recipe expecting to never need bacon or parm again (and things haven’t changed). What I did end up with was a really interesting salad with a nice citrus dressing and crunchy, flavorful toppings. Absolutely worth a try when you need more plants in your life. I made it into a meal by adding some shredded cabbage, roasted cauliflower, and cooked farro.

Chicken Marsala over barley and celery root salad with apple and horseradish (pictured at top, photo by Jesse). I had such a craving for chicken marsala (which was indeed good), but ended up being so much more into this salad. I used 2 celery roots and a quarter cabbage, left out the caraway, and used dill instead of the tarragon. If you can rope your dinner guest into chopping all the vegetables for you, it is a breeze to throw together! (Thanks Jesse!!!)

Parsnip latkes. The latkes themselves are pretty good, but the sauce that goes with these is the real star. It is bright and herby and just what I needed to use up some sour cream and dill in the fridge.