It has been a while since my last meal recap, so there are a few more items here than I made in the past week.

Spicy vegan white pizza with broccoli rabe and truffle cream. I was SO excited to make this, and it was great, just maybe not quite up to the standard of my dreams (which isn’t exactly fair anyways). I really wanted the flavor of the pepperoncini peppers to pop, but they got lost among the other ingredients. The truffle cream was an excellent creamy topping, and really worked well in place of cheese as protein and a binder. I will definitely make this again, just with 3 or 4 times as many peppers.

Easy lentil soup with lemon zest, garlic, and parsley. The gremolata really takes this from a ho-hum brown lentil soup to one that is bright and vibrant. Next time I would even make more of the gremolata for very healthy dollops.

Julia Turshen’s no-freakout fried chicken.  There were so many things I liked about this recipe. It uses a whole chicken that you break down. There is smoked paprika in the marinade. And SPICY HONEY to drizzle on top. It truly did not freak me out, and was incredibly delicious. 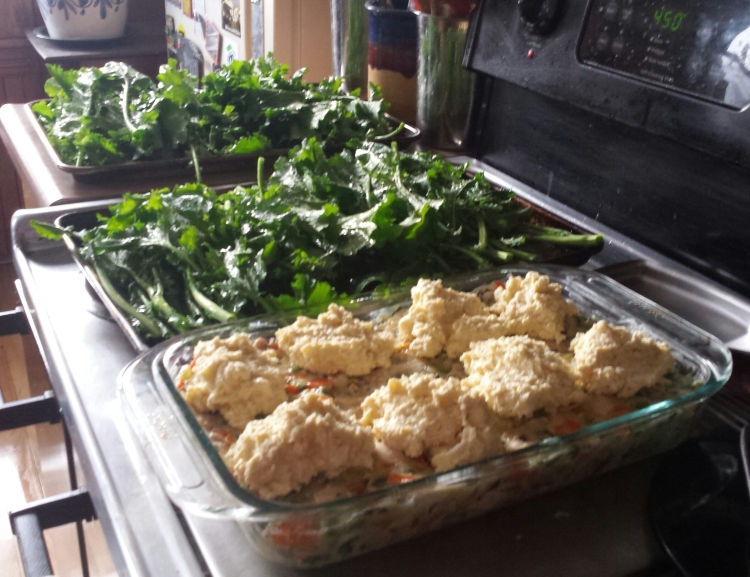 Chicken pot pie (The Homemade Kitchen) and roasted broccoli rabe with lemon. It has been a while since I made pot pie, and my first time making this recipe.  It is chock full of vegetables, with a great binding sauce, and biscuits on top. I made it for a dinner party and the whole crowd was pleased. 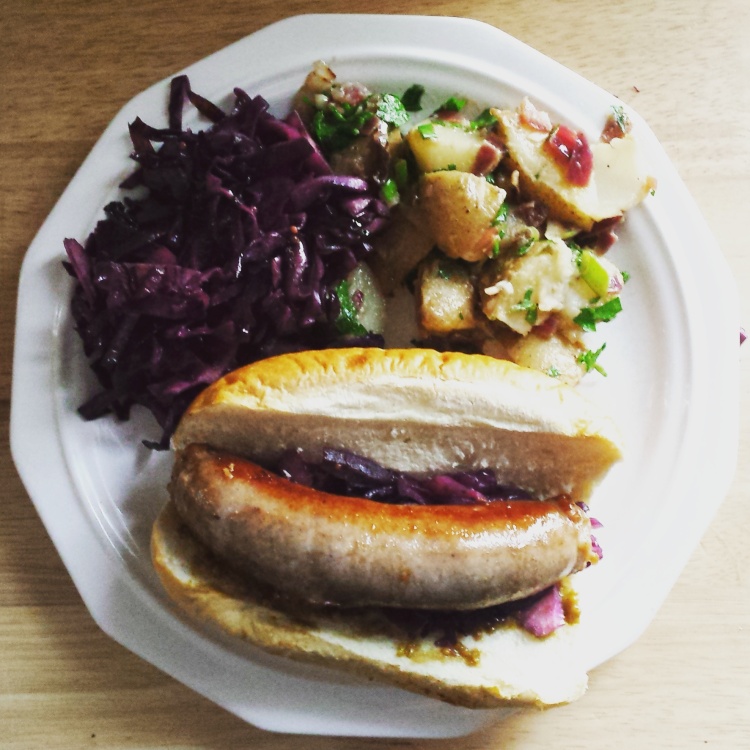 German potato salad (sans bacon, potatoes boiled not grilled), sauteed red cabbage, and beer brats. Is it possible to go wrong with this combination? I had the brat on a roll with a large swipe of beer mustard and some of the cabbage. Later in the weekend I heated up some of the potato salad and cabbage, then topped them with an egg for breakfast.

Mushroom rice burgers (The Sprouted Kitchen) with lemon aioli, avocado, sauteed beet greens, and roasted sweet potatoes. These “burgers” have a long ingredient list, but great flavor. Since they have a lot of brown rice in them, I find them a bit too grainy when put on a bun. I had intended to serve them on a salad but forgot to buy a salad base, so they ended up going with a variety of vegetables in the fridge. It wasn’t the most elegantly composed dinner, but made great use of what I had around.

Chickpeas in a fresh cilantro sauce, tomato, onion, and cucumber koshambari, and bhatura (Vegetarian India). The real showoff of this dinner was the bhatura, an Indian fried bread which I had never eaten more but will be seeking out more often. It was very similar to a pita, but fried instead of baked. The chickpeas did not take much to put together, just a simple sauce made in the food processor.

Pizza with sauteed leeks, Italian sausage, kale, and peppadew peppers. This was a pizza born of random things in the fridge (and it was not my most delicate pie). I had about half a pound of Italian sausage that I cooked and removed from the pan. I sauteed the leeks in the sausage fat. I had some chopped kale that I put on top of the tomato sauce, followed by the rest of the ingredients and topped with shredded mozzarella.

Curried lentils with coconut milk, roasted cauliflower with Indian spices, brown rice, and yogurt. I felt like I should have worked harder to make such a satisfying meal. These were so easy and flavorful. Paired with roasted cauliflower and topped with yogurt, this is one of my new favorite vegetarian meals.

Other reading: The Hippies Have Won. I for one am very thankful that miso, tahini, and quinoa are mainstream ingredients now.