Shark’s Fin and Sichuan Pepper: A Sweet-Sour Memoir of Eating in China is Fushia Dunlop’s account of her introduction to Chinese (particularly Sichuan) cuisine, obsession and immersion, and her calling to record and share little known regional delicacies to the English speaking masses. Dunlop built her career on eating in China, after going to Chengdu first as an exchange student and realizing her intense interest in local cuisine, and the fact that it was widely unknown outside China. The title captures so many of the struggles in this book. Between the revered but environmentally destructive delicacies, and the authentic and truly unique flavors that make Chinese food so legendary; the wonderfully diverse regional cuisines and the blanket unification of “Chinese” food outside the country.

Shark’s Fin and Sichuan Pepper is one of the best food memoirs I have read. Dunlop’s descriptions of specific foods and meals are so intense you can taste them yourself. But her real talent lies in describing how she fell in love with the food of another country and the infinite complexities that few outside China have tried to fully understand. She says “Learning another cuisine is like learning a language. In the beginning, you know nothing about its most basic rules of grammar. You experience it as a flood of words, or dishes, without system or structure.” (71) Dunlop makes the effort to give us that basic grammar throughout the book, describing the history that influenced regional cuisine differences and explaining the techniques and tastes balanced in specific dishes. 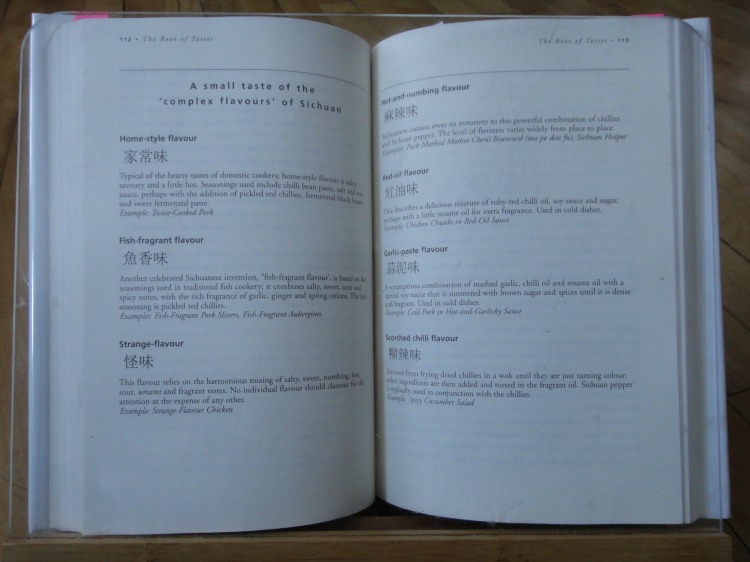 Most of the chapters end with a recipe, but my favorites had what are more like little cheat sheets on one aspect of Chinese cooking. This one pictured is “A small taste of the ‘complex flavors’ of Sichuan.” I have always been frustrated coming across dishes on restaurant menus with vague descriptors such as “strange-flavor.” If only I had known that those two words really describe “the harmonious mixing of salty, sweet, numbing, hot, sour, umami, and fragrant notes.” Dunlop also describes the many, very specific shapes food can be cut into and the wide ranging types of mouthfeel.   It certainly makes our food descriptors seem inadequate, and I think any level of familiarity with Chinese cooking could improve skill cooking and appreciation of all other cuisines.

After reading this book (and loving it) I read some infuriating reviews on Goodreads. Some criticized the lack of detail about Dunlop’s personal life in the book. She does not talk at all about intimate relationships, and only vaguely about her family (I didn’t know she had a brother until I read the acknowledgements). But this was not a book about Dunlop’s personal life, as the subtitle clearly states. It was a book about her relationship with China and its food, and the career she built being an English and Mandarin-speaking foreigner willing to go anywhere and eat anything. Those topics are complicated and interesting enough to fill more books than just this one.

There were also numerous reviewers who put down the book (why are you reviewing this book if you didn’t read the whole thing?!) or were off-put by the descriptions of eating an incredible variety of animals, some of which were endangered. As a vegetarian or vegan you may wholeheartedly disagree with the consumption of these creatures, but these issues are fully acknowledged and part of meaningful discussion (especially in the latter half of the book). Dunlop fully acknowledges the questionable morals in eating living things, discussions she has that make her reevaluate her consumption habits, and the change in attitude she had towards eating any and all animals. These are all difficult topics, and they are described honestly as Dunlop experiences and wrestles with them. (She also tackles the use of MSG in cooking which was especially interesting.)

A quality I admire most in memoir writers is bring able to write frankly about situations in which the author made poor decisions, behaved less than admirably, or questioned a belief they once fully embraced. None of us behave exactly as we want to in all situations, but if we can reflect on and learn from ones in which we made mistakes we will grow. We also change as we experience more things, and hopefully become different people as we see and engage with more of the world. Dunlop’s love for a country, it’s people, their cuisine, and their complex relationship with food paired with another life in England, where food regulation is far stricter and public awareness of food issues more widespread creates a difficult situation. She wants to experience as much culture and food as possible, but is also increasingly conscientious of bad food practices and their effect on the planet. As a result she becomes more reserved, and instead of seeking out delicacies eaten because they are rare and prized, works to find foods that are delicious because of their heritage, thoughtful crafting, and ties to local agriculture.

I’ve read through two of Dunlop’s cookbooks, Revolutionary Chinese Cookbook: Recipes from Hunan Province and Every Grain of Rice: Simple Chinese Home Cooking (her third, Land of Plenty: A Treasury of Authentic Sichuan Cooking, is working its way to me through the library request system).  I especially loved Every Grain of Rice, which has dishes from many regions and gorgeous designs made with rice grains between each chapter. Over time I hope to fill out my shamefully inadequate Chinese cookbook collection with each of them, and recreate as many of Dunlop’s meals as I can. (The photo above is Bear’s Paw Tofu, Chinese Broccoli in Ginger Sauce, and Vegetarian “Gong Bao Chicken” from Every Grain of Rice.)