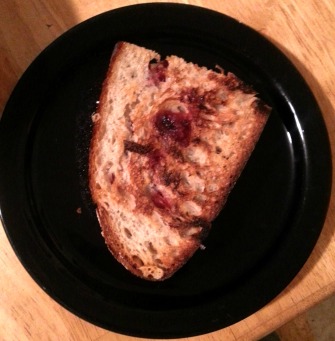 I need to learn which recipes need multiplying, and which are already plenty. There were 11 people at Thanksgiving, and Will and I were in charge of pie, Brussels sprouts, sweet potatoes (just cubed and roasted with paprika and chili powder), a cocktail, and cranberry sauce. All dishes were appropriately proportioned except the cranberry sauce, which we doubled and greatly outlasted the turkey leftovers. It’s a good challenge to think of it as more than just a turkey topping, so last night’s dinner was grilled cheese with cranberry sauce.  I used whole grain sourdough, swiped one slice with Dijon mustard (essential in any grilled cheese), a mix of sharp cheddar, mozzarella, and Parmesan (brie would be heavenly), and a thick layer of cranberry sauce. Toasted up in the cast iron, flipped, and finished in the oven for thorough melting. Served alongside a kale salad with a Dijon vinaigrette to make it a real dinner. A few slices of apple or pieces of languishing turkey, bacon, or ham could also liven up the party. We were invited to share another turkey tonight and I offered to bring the sauce, but I’ll be sure to save enough to have these again (they’re worth cooking up a batch of cranberry sauce to make, regardless of proximity to a turkey).